Last weekend I went to the Cotswolds in Gloucestershire. The purpose of the weekend was to run around (literally) and look at all potential and recorded locations into which Hailes Abbey fabric had been deposited. The weekend was in part successful The discovery of the St. Michael’s, Buckland and its contents including bits of stone from a Hailes reredo (possibly) and a William Morris stained glass window made it all worth it at the end of the weekend. However most of it was spent walking, running, and driving around in circles from Winchombe to Hailes to Broadway and back to Southam. It was the first of what I expect to be a few weekends spent trying to find pieces of Hailes fabric.

The dissolution and subsequent use of Hailes Abbey is well known. For nearly a century after the dissolution a branch of the Tracy family, local gentry who could trace their family back to before the Norman conquest, lived in the Abbot’s lodgings. They built a manor house in nearby Toddington in the late 17th c after the Civil War. But until then, and until the damp got to them, they lived in refurbished housing on the former monastery. It is also well known that that a number of items were pillaged and investigated under formal proceedings by commissioners from the Court of Augmentations. These pieces of fabric either saw their way into the black market or became momento mori for the local community. The destruction of the Abbey as reconstructed through these commissioners’ reports are extremely valuable not just for the motivation of the community involved, but for the the actual accounting of the pieces of fabric deemed valuable in an individual’s opinion to remove.

All three installments and framings of former Hailes stained glass are from the Early English period. It is likely that the glass was commissioned and installed sometime after the shrine of the Holy Blood was built in 1270. A likely date would be early to mid 14th c before the plague, a wool mite infestation, and general downturn of economic times for the Abbey. Pilgrims were plenty bringing in donations and a new East window, remnants of which were found in the archaeological investigations of circa 1900, would be a likely candidate for the figures of St. John and St. Bartholomew found at Stanton. However, figures from Toddington/Hailes parish church are likely to be from the Abbot’s lodgings and would be, from common history, associated with a building program from the 15th and 16th c after the lay brothers’ dorter fell into disuse. The windows and the figures supposedly show the seven sacraments in text with figures further supporting the cult of the saints.

What is curious about these pieces of glass is, well, that pieces of glass survive at all. Further pieces are found in the Hailes Abbey museum (I have yet to see them this year!), but all of these are framed and given a place of honour in the East windows of Didbrook, Hailes parish and Stanton. In the case of Didbrook the link to Hailes is clear: the parish was partially rebuilt and blessed after a bloody slaying following a regional war during the War of the Roses. At this time, in the 15th c, the Abbot of Hailes had enough funds to ‘take over’ or assume the running of the parish. It was in the recent memory of the local community that the patronage of Hailes would have rested and thus a memorial of sorts would not be unreasonable.

What concerns me further is the architectural details contained in the main panels or framed remnants of the stained glass. Is it in this that we have a glimpse of the splendor of the late 13th c architecture? It isn’t clear, but a look at a piece of a vestment from William Whytchurch found in Buckland (known as the Buckland cope) shows similar splendor in architectural details. The top of the shrine – it is said in the church documents – is found at the top of this cope. The church, however, is not Hailes as it does not have a radiating set of chapels. Could it represent, instead, a ‘normal type’ Cistercian church? Hailes was not this as it required an ambulatory for viewing of the Holy Blood. Only Beaulieu and Croxdon, the mother church and an ancillary, contain similar radiating chapels at the East end until a flat, cross like ending so common at Fountains, Rievaulx etc.

The stained glass discussed and the cope are below …. 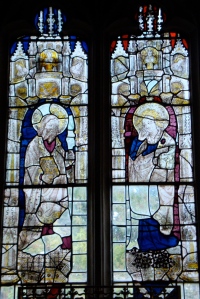